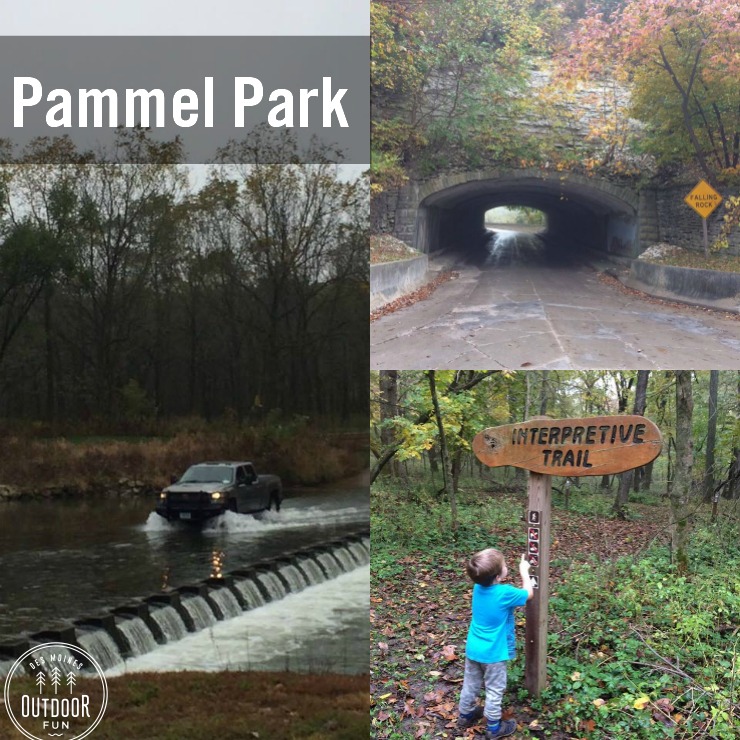 I’ve been meaning to go check out Pammel Park this entire summer, and we finally made it! This is a Madison County park, down in Winterset. It has two very unique features, shown in the collage above, a tunnel to drive through and a ford to drive over. There are several trail options, all with dirt footing and heavily wooded. We had a lovely morning and will definitely be visiting again!

You can see more specific details on the Pammel Park page below or check out its location on the interactive map. 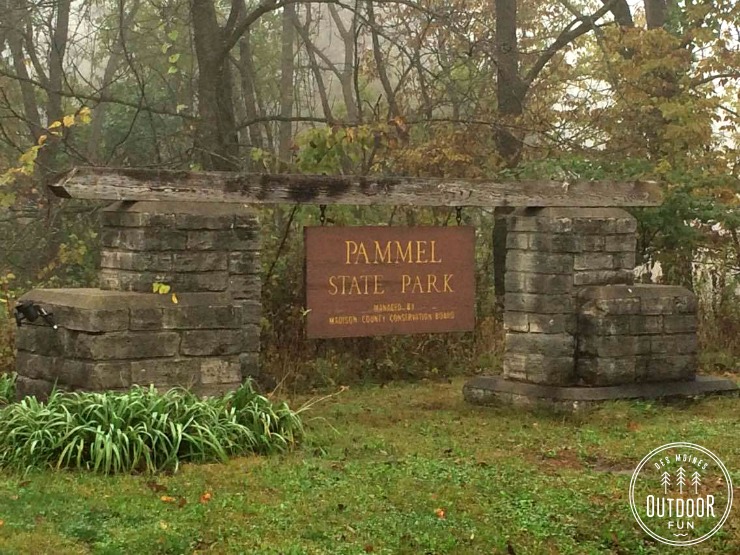 There are a few different entrances, but this is the one that our GPS took us to from Waukee. 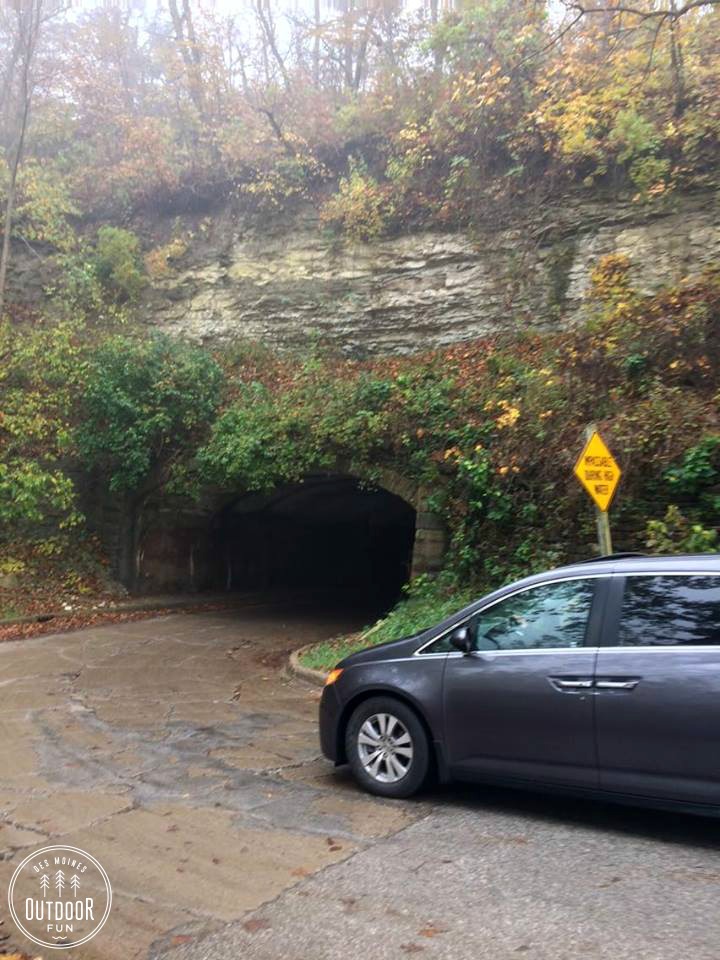 I had talked up the tunnel and then boom, it’s right at the entrance and right after you turn the corner. Harmon Tunnel is the only highway tunnel in Iowa, originally dug out in 1858. 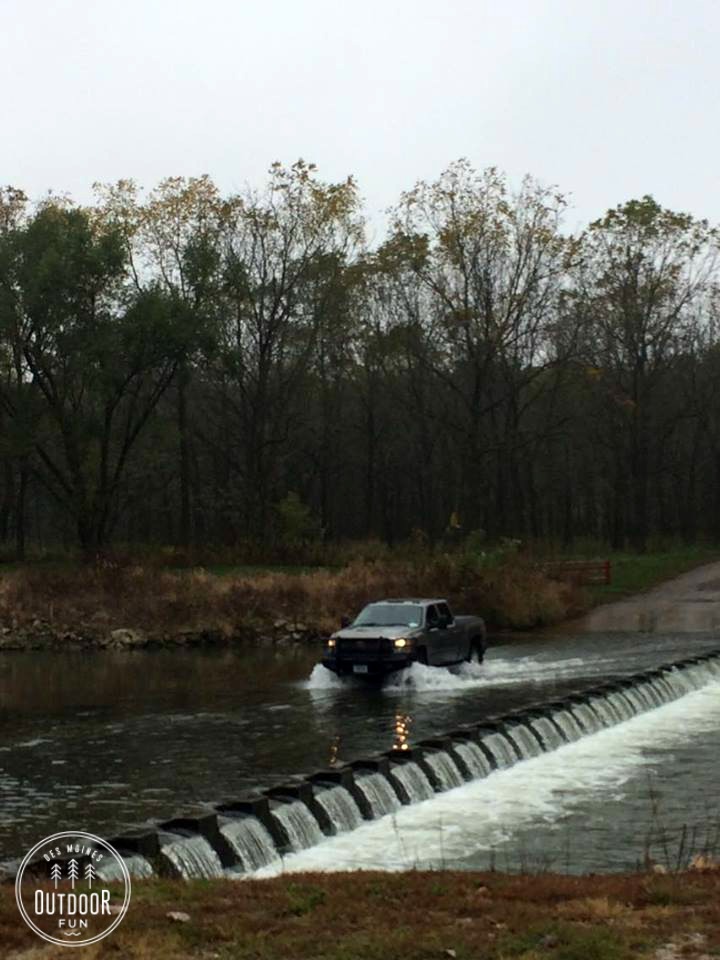 The Middle River Ford dates back to the 1920s and is the main access point to the other side of the park. It is closed during flooding and icy conditions and serves as a recreation spot for wading and fishing when the weather is warmer. It was a little nerve-wracking driving across! Our Honda Odyssey did just fine. There were rocky banks and sandbars downriver from the ford, with folks hiking around even in October. 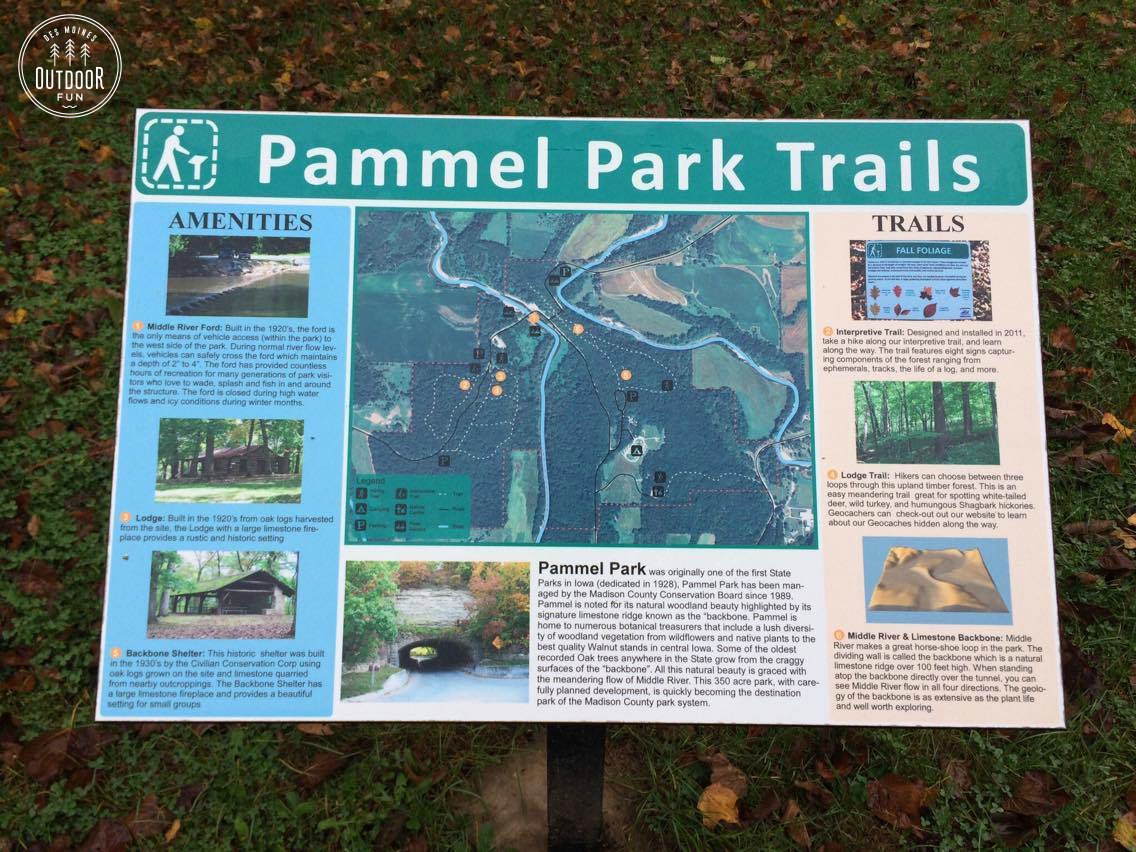 We found this trail map over the ford and wished we had had it from the beginning! You can click on it to enlarge; the black lines are the road and we came in by the number ‘1’.  The two trails we hiked below were by 2 & 4, and then hiked to the number 6 from the parking by the ford. As you can see, there were plenty of trails left to explore. 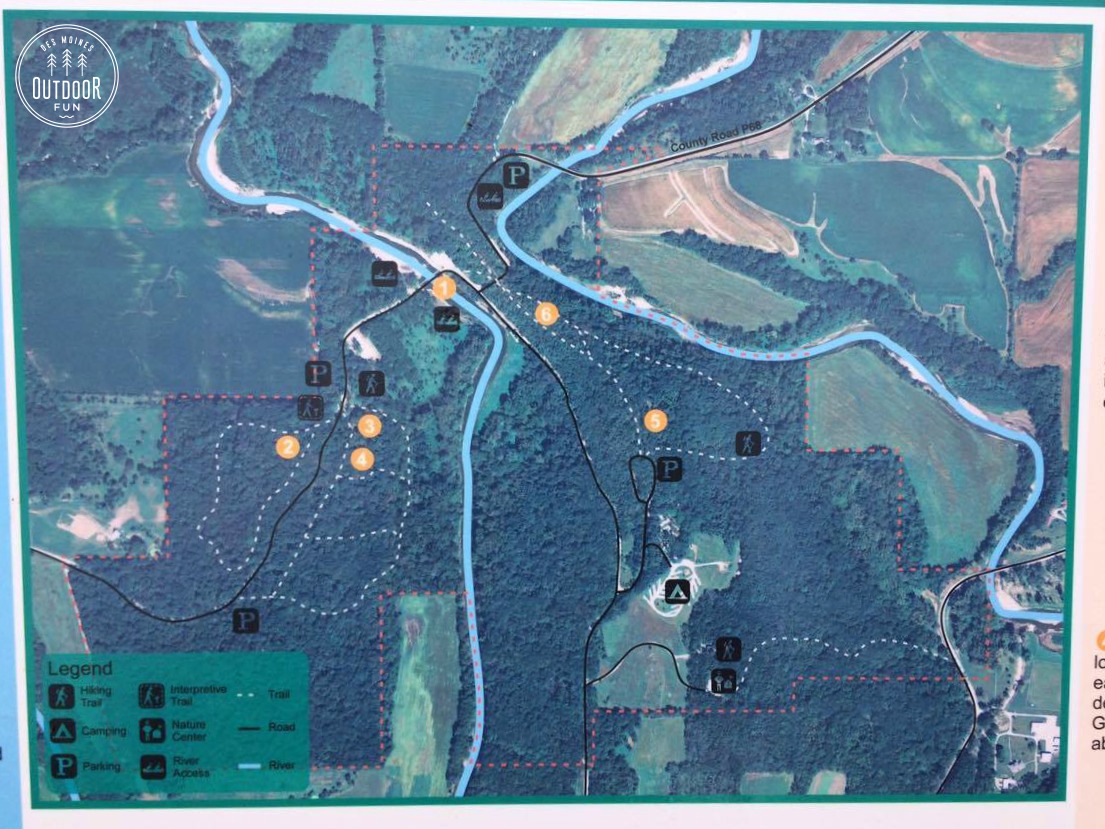 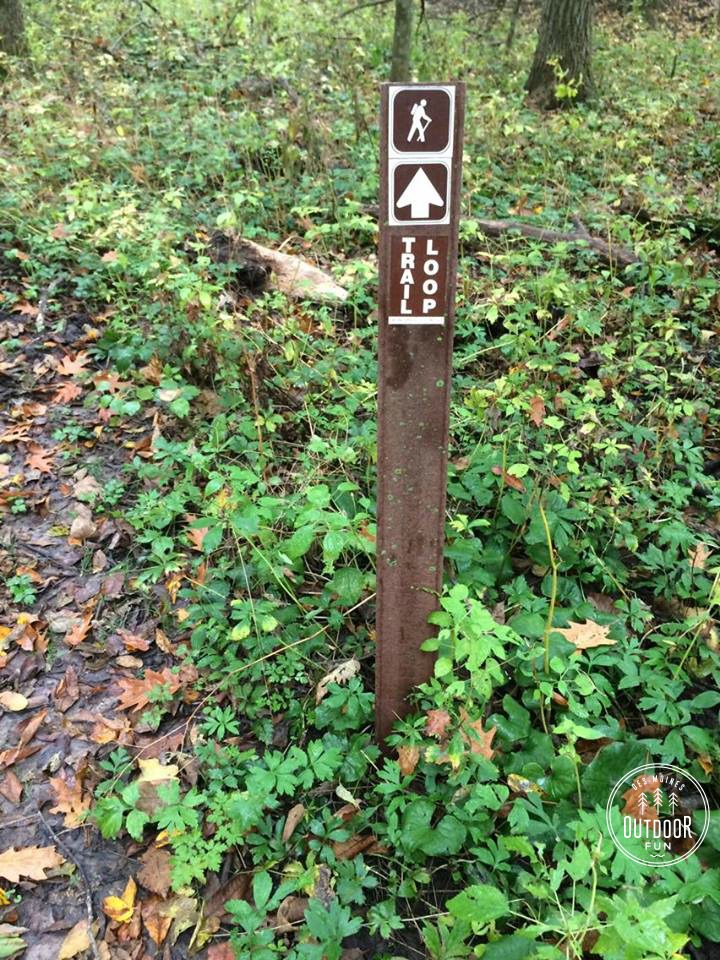 The trails were nicely marked, with these signs and sometimes with labeled/named signs. I wish they had mileage measurements, though. 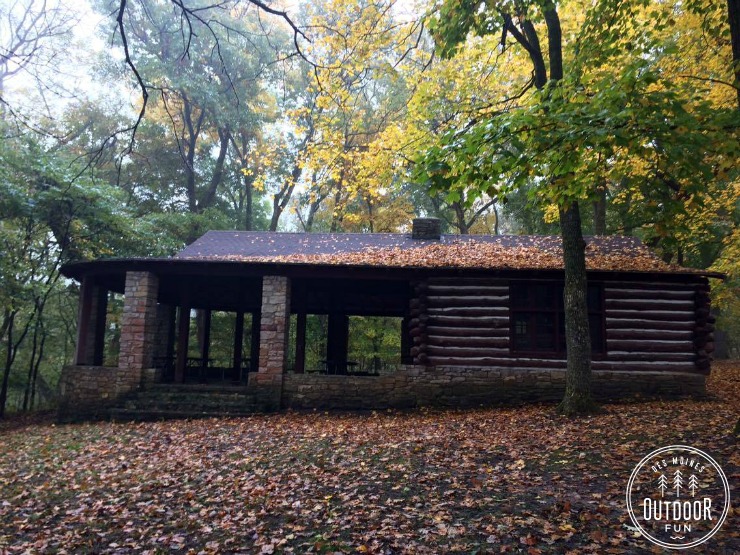 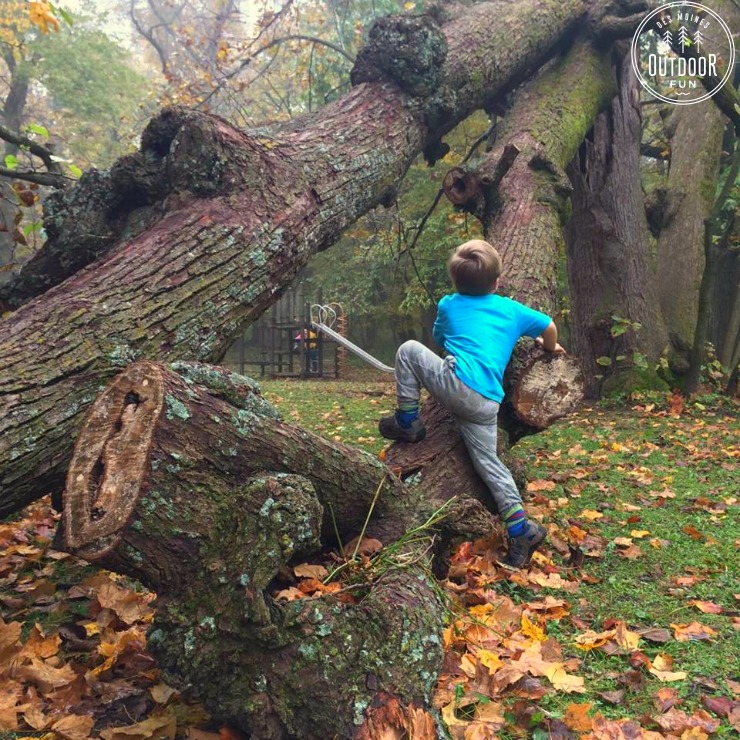 We started out parking by the Lodge, a 1920s building built out of oak trees. There were some beautiful fallen trees to climb on outside, in addition to bathrooms, a grill, and a small playground.

There was a trail on this side of the road, clearly marked, which we took. We stayed “on the loop” (well marked) and saw a ton of cool fungi and crossed a bridge. 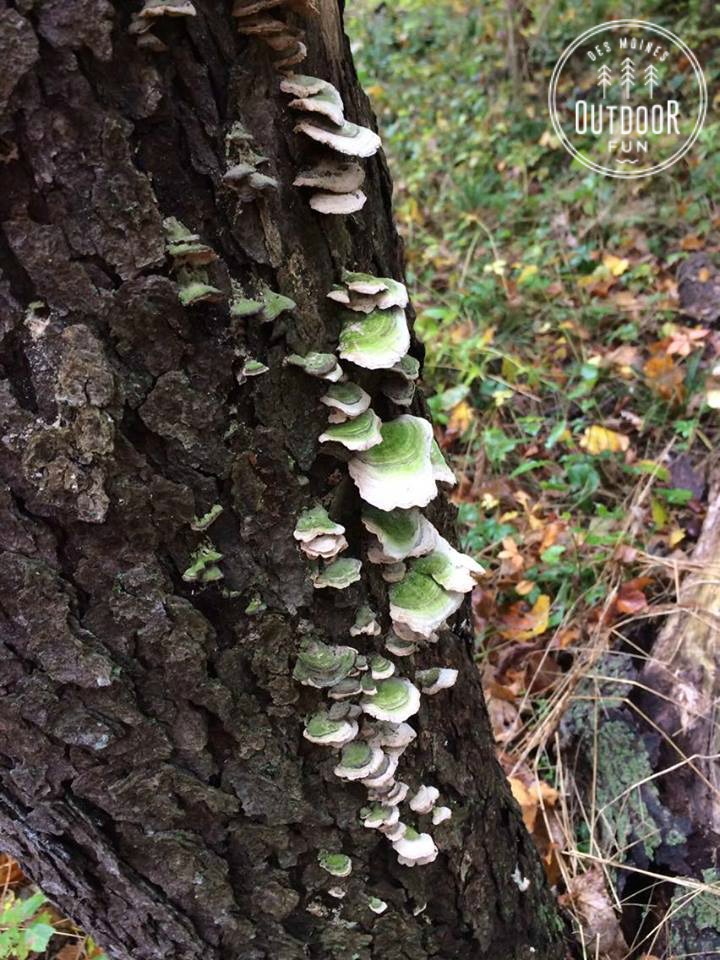 I found this grassy green moss on top of mushrooms very striking. 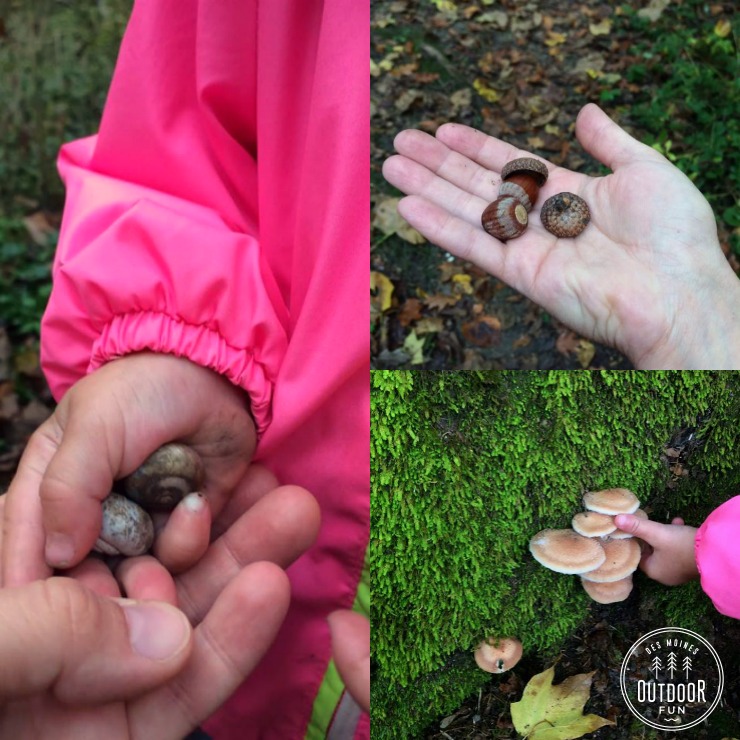 This is a great spot for moss, leaves, and acorns. We also found multiple white shells. 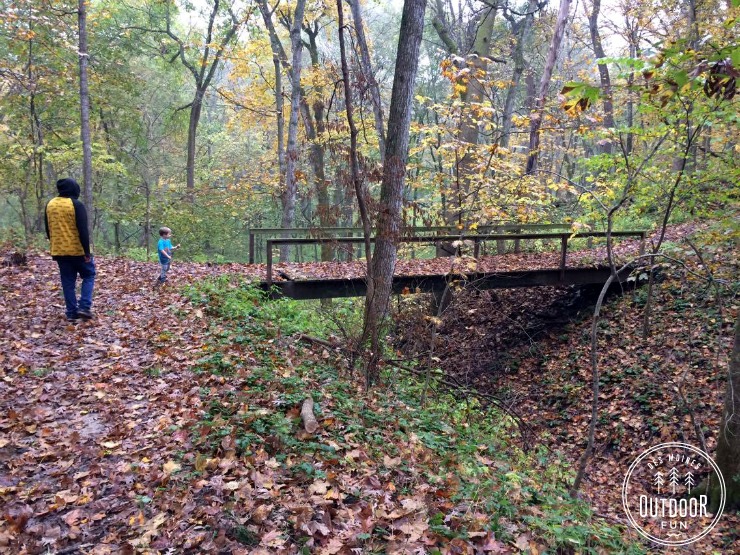 This bridge had a hole in it! I couldn’t believe how dense the leaf fall was; this trail would not be good for an early walker as rocks jutted out. 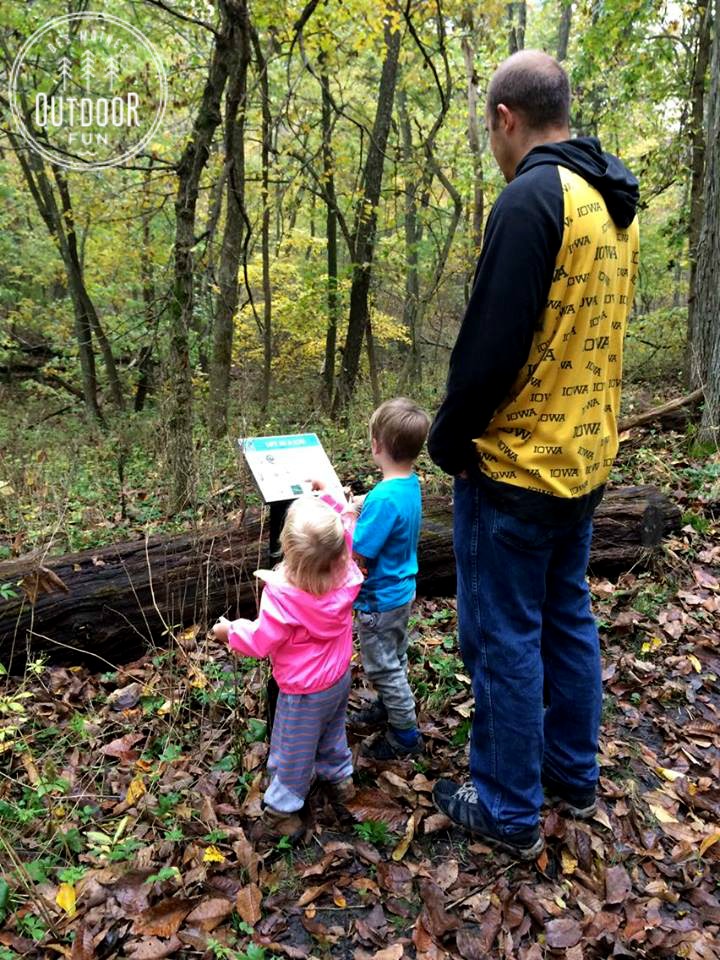 Across the road from the lodge’s parking lot was an ‘interpretive trail’ that had a bunch of educational signs. 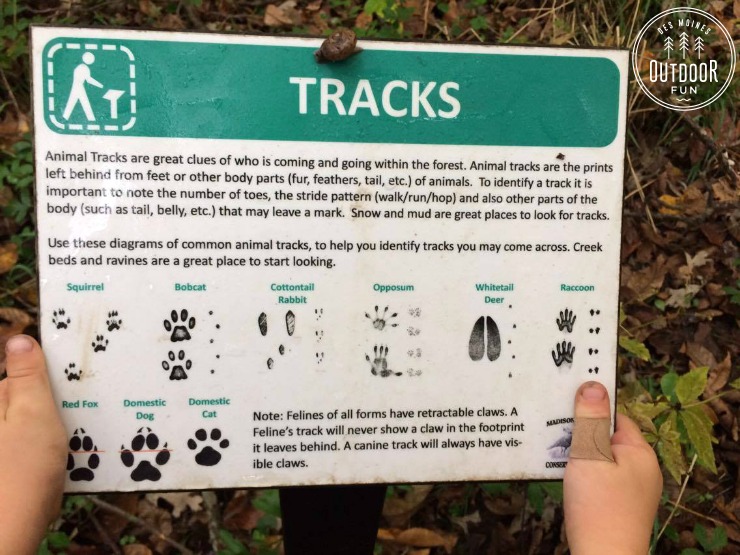 Look, this one had a snail on top! They shared information about what to look for, and what was all around. We really enjoyed them – this was my favorite, with the prints. 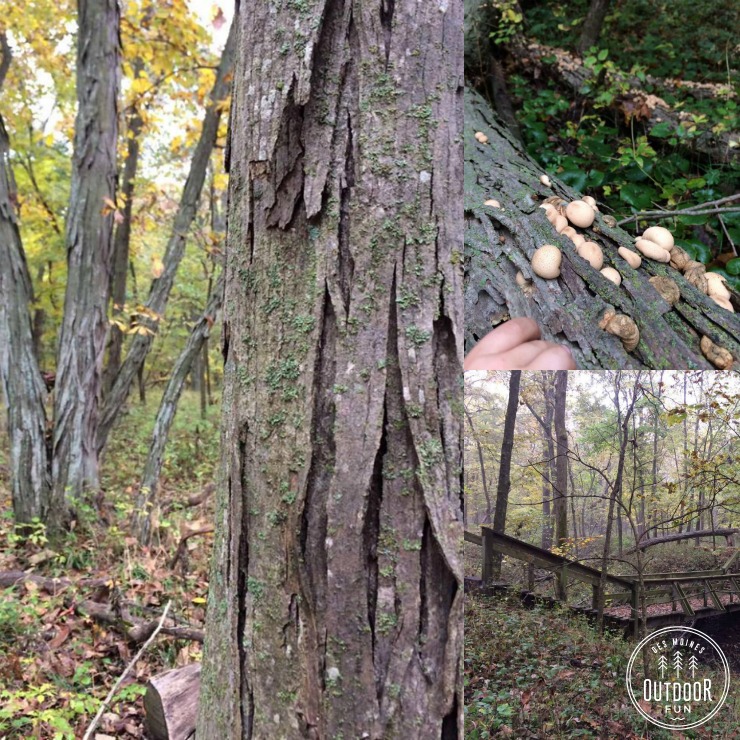 I don’t normally pay a ton of attention to trees, but the “shagbark” was very noticeable, giving the trunks a craggy look. My kids liked peeking under the flaps – one of the signs taught us that bats sleep under them sometimes! We also found super cool “puffball” mushrooms; when they dried out, they puffed spore smoke out once they were hit, which was a big hit with my kids. 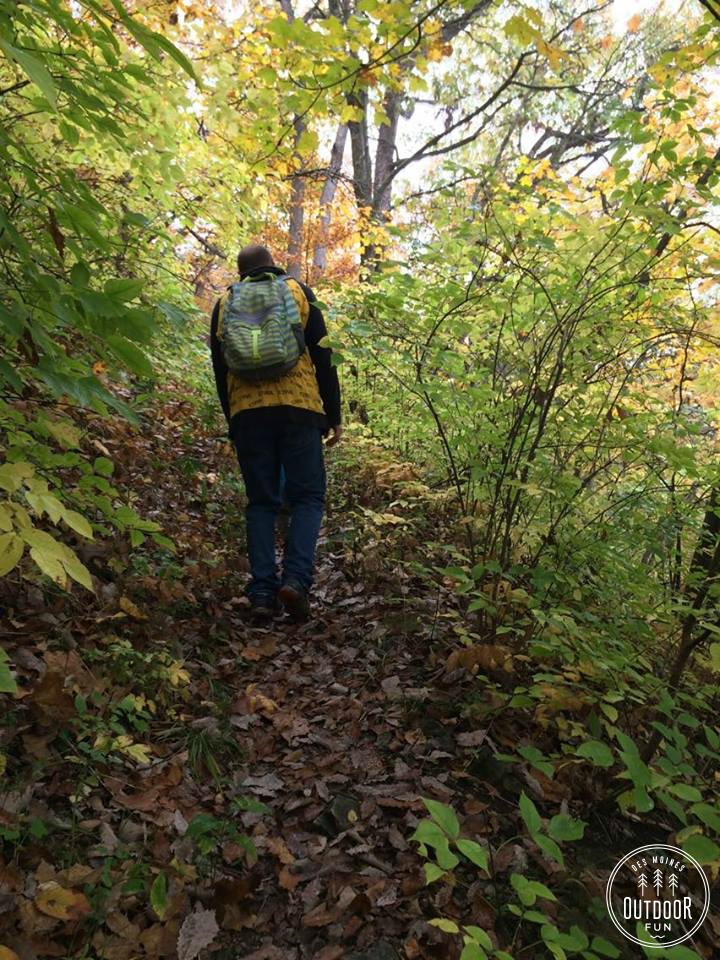 After that, we drove back over the ford and parked, finding the unmarked trail to climb up the “backbone” – a limestone formation going over the tunnel. The trail was extremely steep; my daughter went on my back and I had to crouch down several times. 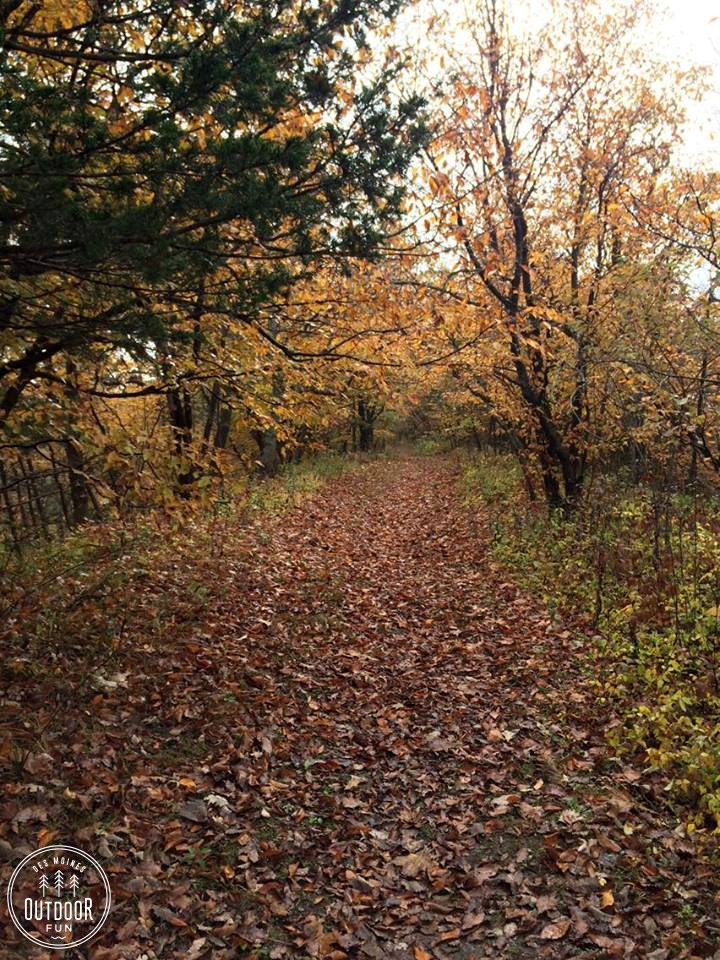 Once we actually hit the top, it opened up to a very wide and flat trail. Their website talks about being able to see the river in 4 different ways, but we could barely see it at all through the trees. 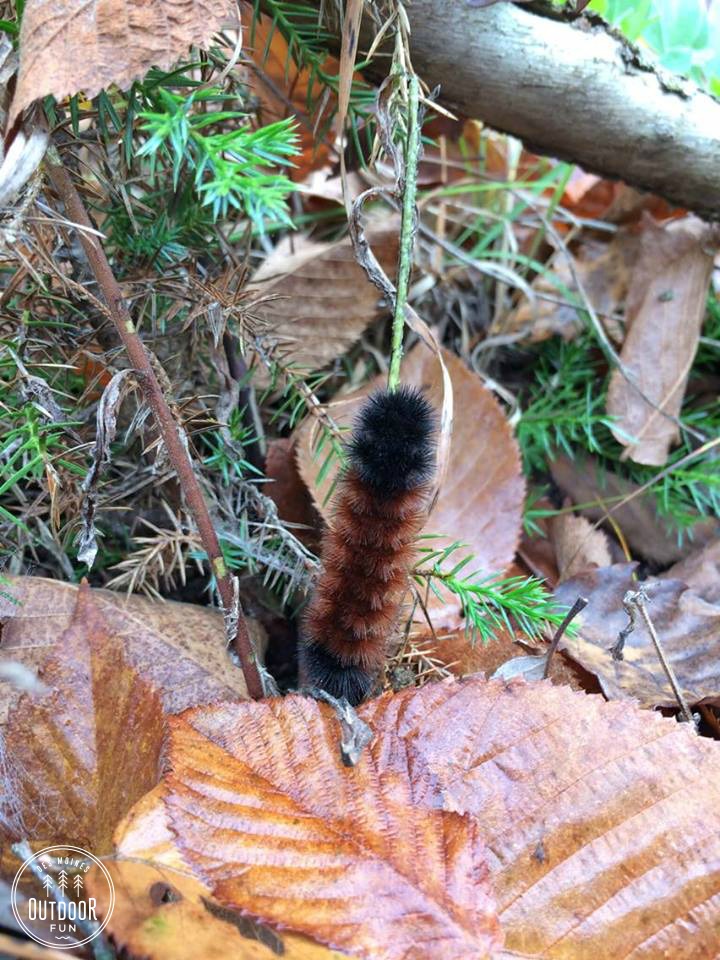 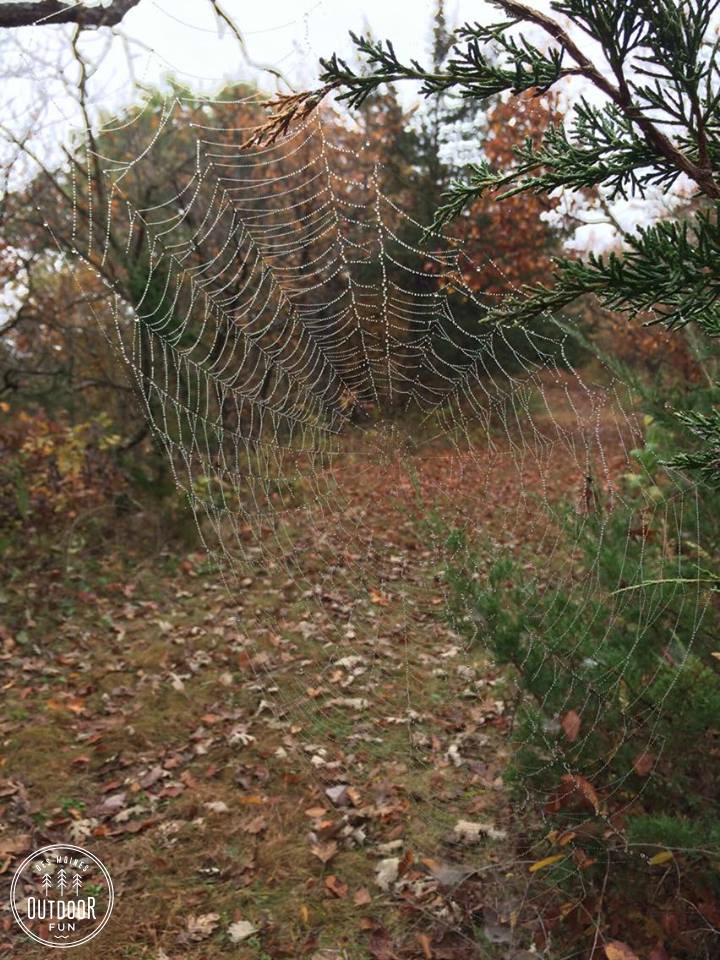 The fog and morning mist lit up several spiderwebs beautifully, I love this one! 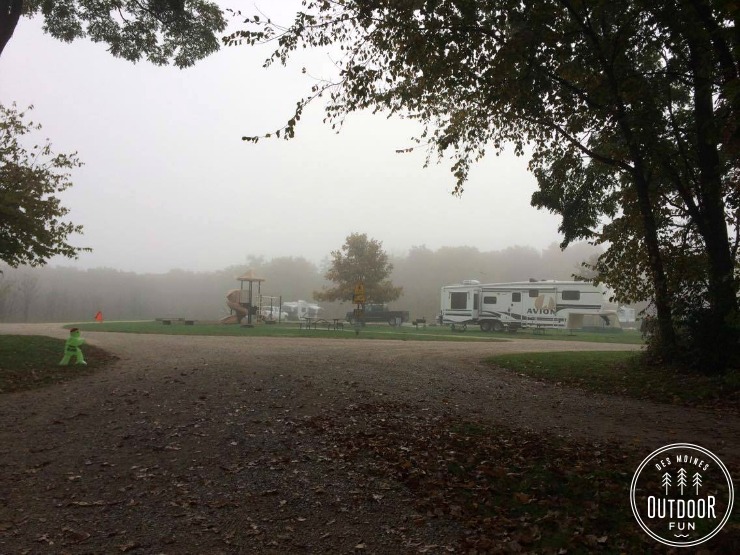 A few other notes were the campground, with lots of RVs. There are tent-only sites and rentable yurts but we didn’t happen to see either of those on our quick drive-through. The campground had its own playground, and then the 1930s Backbone shelter is over in the same area. 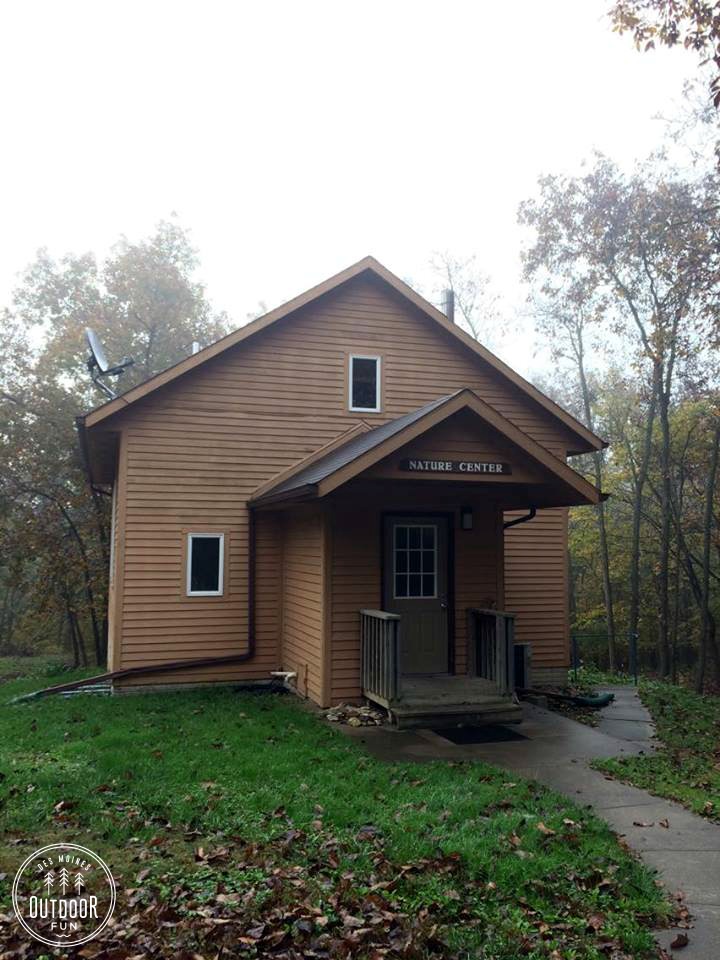 The nature center was closed, as I expected, and is only open for specific programming 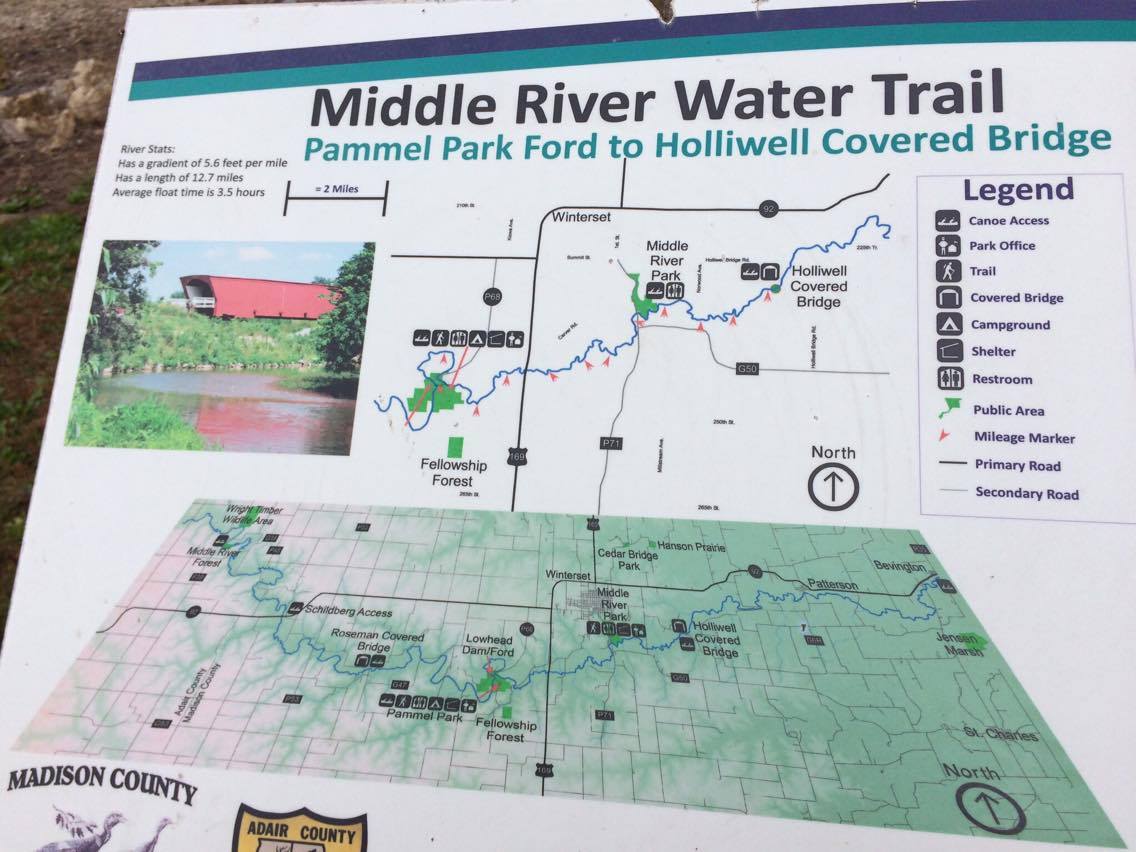 This sign shows the “water trail” for paddling in the area, we have never kayaked but this looked like a really cool place to try it!

So, that’s our first trip to Pammel Park! It was definitely worth the drive; we spent all morning hiking around and then drove into Winterset for lunch at Rodell’s Smokehouse, which was tasty. We will definitely be going back next summer, for a chance to play in the ford and wade.

Spend an entire day in Winterset with this fun itinerary.